Howdy y'all - just wanted to do some lines in reference to the rockin' Labor Day weekend Megan and I spent in Walla Walla, WA with semi-recent transplant and HuskyBoy enthusiast Karl. Walla Walla (emphaisize the first "Walla" for authenticity) is a lovely little town in the southeast corner of Washington known for onions, travelling salesmen, Seventh Day Adventists, a booming wine biz and the State Pen. I do not know if these things are natural bedfellows - I will leave such conclusions to yourselves.

We rolled into town Friday night after an uneventful drive from the Emerald City and wound up at the Marcus Whitman Hotel, or "The Marc" as the locals know it (http://www.marcuswhitmanhotel.com) . Had I been less mannish in my driving style, we would have stopped at Karl's first, but not remembering the exact exit, I took the one which I believed to be correct and instead took us indirectly to Downtown Walla Walla. The Marc is a large, well-appointed hotel with a nice bar, and as a general rule, folks who know what they're doing behind the stick. A few drinks later, it was off to Karl's for beddie-bye.

The real throwdown started on Saturday. (Karl and I have a pathologically co-dependent and enabling relationship whose antidote usually arrives in about 48-60 hours in the form of our livers audibly screaming for mercy. It is a relationship that was forged in the boozy and smokey kiln of a single night many years ago in Lawrence, KS, was rejoined and steeled for a seven month stint in Minneapolis, MN, periodically rekindled in Kansas City, KS and now regularly revisited in Sea-town or Walla Walla - thank heavens for the temperance-inducing four-hour drive). Suffice it to say, we like Bloody Mary's- that's no epiphanal revelation, so whatever. After a bloody and brekkie at the house, we three busted downtown for a whirlwind tour of the Walla Walla Farmers Market, specifically for cheese from a local producer, Monteillet Fromagerie (http://cheesebyhand.com/?cat=38). We had hoped to go out to the Monteillet farm, but it's a heavy production time, so no tours or caprine fun in the petting pen for us. We grabbed a small round of a young sheep's milk cheese and were outta there to perform my usual border run to Milton-Freewater, Oregon to procure Everclear for the making of limoncello and other sundry liqueurs. (It was a success although our border run for hooch sadly lacked any appearances by Jerry Reed or Paul Williams). Afterward, we headed toward the airport appellation and hung out with Steve and Tim from Trio Vintners. We sampled everything in a bottle plus some Mouvedere outta the barrel, which was the best. (We also ate our local cheese, which I will report was so-so; probably needs a bit more ageing for my taste. Though as the addage goes, I'm mostly in the camp that, along with pizza and the lovin', for cheese, there's only good and better.) Trio's reisling is very nice and eminently drinkable, and the sangiovese and syrah hold their own. They're new-ish, so go buy some wine from these wonderful people. Buy a mixed case - drink half ASAP, then sit on the rest - trust me. By the way, Meg and I had met Steve in serendipitous fashion at a party in Seattle a few months before, but more on that later.

Saturday afternoon we headed down to the culinary NKOTB, Saffron, for a late afternoon snack and drink. Saffron is Mediterranean-influenced with both small and big plates. We had: braised Wagyu beef cheeks - awesome; some forgettable but inoffensive spreads; and some flatbread with finely crumbled Merguez sausage on it - I give it a "good". But they did have a vinho verdi (one of Meg's faves) by the glass, and Karl and I had giant tumblers of red sangria, noting white sangria was also an option. It was a lovely repast for an afternoon, one we'll be sure to revisit in the future. After Karl and Megan indulged me in a bit of one of my other vices (record shopping), we enjoyed a few hours of leisure time and record listening before the dinner hour of 8PM approached.

At 7-ish, we sallied forth on the fifteen mile or so drive to Waitsburg, WA to hit two different destinations. We would bookend the evening at the jimgermanbar and saunter over to The Whoopemup Hollow Cafe (www.whoopemuphollowcafe.com) in betwixt for vittles. It is hard to believe that two damn fine places exist in this tiny town of a population only just north of 1000. It is some serious Green Acres-type stuff as most of the folks out there are Seattle escapees, a freakish number of which had done their time at Campagne (www.campagnerestaurant.com - which Meg and I love, along with Cafe Campagne downstairs) in the Pike Place Market. Jingermanbar is just a nice little slice of a bar and bistro with a good booze selection and a rotating menu written on the roll of butcher's paper tumbling down the wall. I spied a serrano ham in the fridge which is enough endorsement for me. Frankly we were there for the drinks before we sauntered 'cross the way. I spoke briefly with Jim who said they'd be doing monthly specialty dinners, the first of which is wild boar. (Goddamn why don't we live in WW, WA???) Either way, Whoopemup was in our future.

The Whoopemup is all about Southern comfy food. Now granted, we had been imbibing most of the day, but the first thing outta the waiter's (and I believe owner's) mouth was "Oregon crayfish, blah-blah per pound," to which my natural reply is always "bring us blah-blah pounds and bring me a PBR/ Dixie / Olympia (depending on locale, naturally)." It is late in the Pacific NW crayfish season, no doubt, but there is no way that I'm am eating in Waitsburg, WA, being offered peel-and-eat crustaceans, and turning them down. The shells were hard, but there was butter and the late-season makes the claws edibly and deliciously large. The memories begin to get slightly fuzzy around this time, maybe not even from the booze, but from the high of Waitsburg, and frankly, the entire day. I remember having fried catfish (totally edible), and Karl and Meg had some things too, but mostly I remeber being in a small town in SE Washington and enjoying time with my wife, a dear friend, and eats and drinks I had no right to expect I should be having - and that, my friends, is the magic of unexpected dining pleasures. After dinner, we bookended at the jimgermanbar for a nightcap, and headed back to WW, WA - sated and truly delighted.

Sunday - Are there any people in the world who do not enjoy a county fair? (As a youth, I stayed in 4-H just long enough to win a single purple ribbon for making a bat-and-ball rack in wordworking, then beat it out for the greener pastures of pee-wee baseball.) I love me a fair. The rides and food at the Walla Walla county fair were, sadly, standard fair fare - wierdly no awesome Walla Walla Sweet Onion Ring stands....? Anyhow, what they did have was honest-to-goodness para-mutual low-rent horse racing. I love the ponies, and there was no possible better way to cure a groggy start to the day than a Coors or Coors Lite red beer and the thrill of losing $2 on the first bet. This is one of the many reasons I love horse racing: A) You can only lose money every 24 minutes, B) It encourages a modicum of skill in the ability to read a racing form, C) Ignore B and bet on the horse(s) with good names, and D) I don't believe there's a "dry" horsetrack in the US, especially as evidenced this friggin' SUNDAY in Adventist-rich Walla Walla. Hey, I only won a single bet, but it did pay out the equivalent of two more beers.

We spent Sunday night at the home of our new friends Denise and Steve (along with their boys Riley and Finn) from Trio Vintners (www.triovintners.com) - that is to say we met Denise and the boys that evening, but as mentioned, we had met Steve at a party in Sea-town a month or so in the past. Let me cut to the chase - Steve was the bass player for one of the best bands of the mid-to-late 80's, Big Dipper, a fact he very modestly let slide out in cocktail conversation at said Sea-town party amongst a handful of music-crazy Kansans. In the musical tree of Kansas (the state) there is, well, Kansas (the band) and The Emabarrassment. We don't listen to Kansas, but we do listen to the Embarrassment, and thereafter the lovely Bostonian offspring, Big Dipper. Kansans LUUUVVE them some Big Dipper. Suffice it to say, I was floored. I knew Karl and Steve would get along great (verified in the Trio shop on Saturday), and solidified Sunday night over some lovely thrown-together dinner, six (or seven?) bottles of wine and a bottle of my homemade limoncello. We saw a family of seven or eight deer run across the hill behind the house, and if the setting were any more idyllic, I could probably write some really crappy poetry, and then mention the babbling creek that also runs through their yard. After many hours, drinks, and parting drunken hugs and goodbyes, we made our way back to Casa Karlito.

Monday - hangover and drive home, obviously...
Posted by thehuskyboy at 4:32 PM No comments: 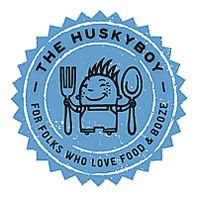 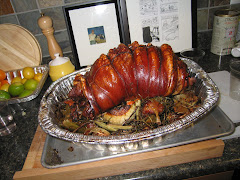 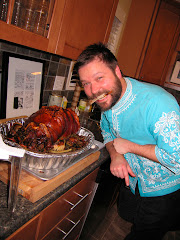 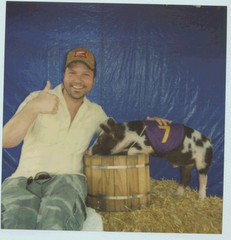 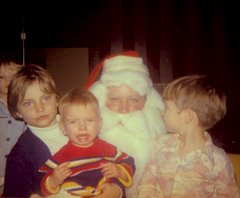 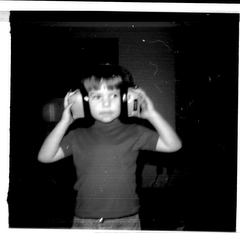 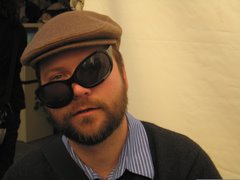 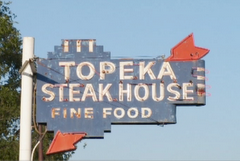 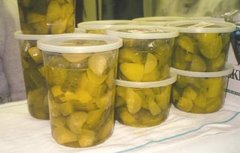 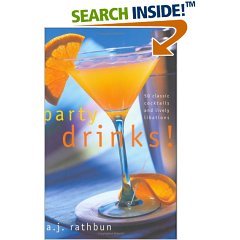 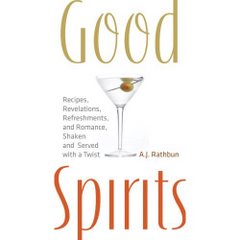 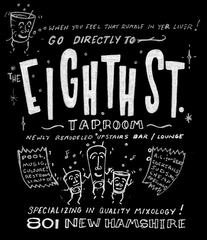